Toby Muse
author of
Kilo: Inside the Cocaine Cartels 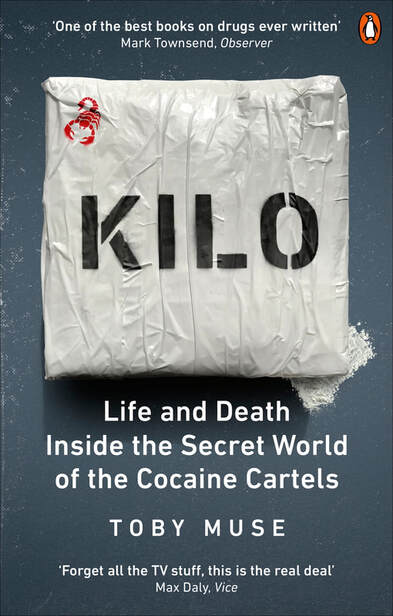 "One of the best books on drugs ever written" Mark Townsend, Observer
"Forget all the TV stuff, this is the real deal" ​Max Daly, Vice
"Muse's tautly written account of his intimate prowl through Colombia's narco world is both compelling and unforgettable...Simply kickass" Jon Lee Anderson,
​The New Yorker, author of Che Guevara: A Revolutionary Life

Trailer for Kilo: Inside the Deadliest Cocaine Cartels book

Kilo: Inside the Deadliest Cocaine Cartels is a thrilling journey through the cocaine industry, meeting the men and women who live and die in the drug war. This book follows one kilo of cocaine from its origins in Colombia's jungles all the way out to the Pacific Ocean on its way to meet the US's demand for the drug. The kilo pass through the hands of cocaine producers, farmers, killers for hire, drug traffickers and their lovers. These are the narcos in the 21st century.

The cocaine trade is fueled by greed, sex and corruption; billions are to be made and death and betrayal are always around the next corner. After decades fighting the cocaine industry, billions spent, countless lives lost, there is now more cocaine than ever before and gangsters are making fortunes. From fields in Colombia's badlands, to slums that serve as training grounds for the cartels to the vast Pacific Ocean where narco-subs carry tons of cocaine, Kilo asks: can cocaine be defeated while the wealthiest countries keep buying it?

Toby Muse is a journalist, author and documentary filmmaker. His work has appeared in The New York Times, CNN, BBC, The Guardian and others.