In war-torn Aleppo, Syrian rebels are fighting the regime block by block. 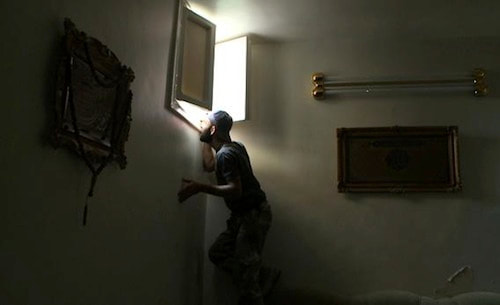 In a first-floor living room Syrian rebels huddled together and shouted “Allahu akbar” as mortars rained down on the surrounding buildings, each blast shaking the earth. Armed with Kalashnikovs and a few rocket-propelled grenades, this group of 20 rebels had spent the past several days fighting the Syrian army&rsquo;s sharpshooters, tanks, helicopters, and mortar teams. But now under intense shelling they were pulling back a block. Here, the fighting is house by house.

This is Saif al-Dawla, a corner of the city of Aleppo that is now part of Syria’s front lines. Even the blasted-out buildings and abandoned homes can’t hide that this was once one of the city’s nicer neighborhoods before it became a battlefield.

Aleppo is at the center of Syria’s civil war. The Free Syrian Army claims to control about 70 percent of the city. In their territory, the FSA roam freely, with command centers and checkpoints. But the final 30 percent is proving hard to capture. “We need more weapons,’’ says the commander known as Abu Nastro, explaining what the rebels need to break the bloody stalemate. “Why won’t the world help us?”

While the fighting is more intense in neighborhoods like Saif al-Dawla, in reality the entire city is a war zone.

For the past six weeks, government forces have been pounding Aleppo with airplanes, heavy artillery, and bombs dropped from helicopters. Shelling, much of which appears to be indiscriminate, is all day and all night. At night, one hears the shelling smashing one part of the city, listening as the explosions edge closer. The government’s message is clear: Nowhere is safe in Aleppo.

Rebels guess that they can take the whole city in two months, thereby consolidating their control over much of northern Syria. (They already control at least two border posts with Turkey.) For that, they say they need far better surface-to-air missiles to combat Russian MiG jet fighters and attack helicopters. The government’s domination of the air over Aleppo and the rebels’ control of the ground means the city will likely remain locked in fighting.

In the meantime, families keep loading all they can carry on to buses to get out. Most will end up in the refugee camps like those inside Syria, Turkey, and Jordan, joining the 200,000 other Syrians who have fled the violence.

But as miserable as the camps can be, it can be better than staying. On a recent afternoon, witnesses reported seeing a helicopter drop a 250-kilogram bomb on a neighborhood. Seven people were killed, including two children. Lacking a working fire department, neighbors set up a ladder next to the burning building and threw pots of water at the flames. “There’s a Free Syrian Army base seven blocks from here - the army knows about it. But they only target civilian bases,’’ said Abu Kuram, an FSA commander taking a break from trying to put the fire out.

A nearby hospital is one of those civilian buildings that has been repeatedly hit—twice by airplanes and seven times if you count the mortars landing so close that shrapnel has ripped through the building.

Parents brought in their 4-year-old girl. Hair neatly combed, her eyes closed, she looked asleep in her mother’s arms. The mother’s face, enveloped in a black scarf, was contorted with grief—wild eyes and a silent mouth. The people in the hospital immediately pronounced the girl a "child martyr." “Eighty percent of the patients we get here are civilians,” said a doctor who identified himself as Osram. Back at Saif al-Dawla, the rebels take advantage of a slowdown in the mortaring. In single file, they exit the building and trot along the block.
​
Reaching the corner, they sprint across the open intersection one by one, dodging the regime’s snipers dotted in the blasted-out buildings. The last one makes it across and is hugged by his fellow fighters. A mortar explodes 20 meters away in the middle of the street. For a second, everyone in the group is dazed, ears ringing. They take cover farther down the street. They’ve lost another block.
Next Article (11)